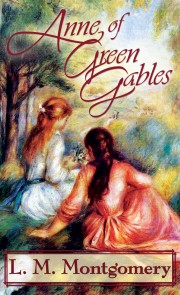 Anne of Green Gables is the classic story and first book in Lucy Maud Montgomery’s beloved series about a precocious girl, Anne Shirley. This wonderfully funny story follows young, orphaned Anne as she moves to the small town of Avonlea in Prince Edward Island, Canada and finds people to love, finds her place in the world, and eventually grows into her own.

This is a classic story of childhood mistakes and adventures that everyone should read, but is particularly poignant book for girls. Young teenagers will find this story of adolescent joys and missteps both entertaining and meaningful.

The character of Anne Shirley quickly won over the hearts of readers when the book was published in 1908. Mark Twain wrote to Lucy Maud Montgomery saying Anne Shirley was “the dearest, and most lovable child in fiction since the immortal Alice.”

ARose Books strives to maintain the original character of all the old books we republish. As such, our publication of Anne of Green Gables contains all the original spelling as published in 1908. We have not updated the spelling of words that have changed over the years, nor have we Americanized any words that were originally printed with British spelling. We hope that you will enjoy reading this story in its original, classic form. This publication also includes restored images from the 1908 version of the book as well as a larger font size and more spacing between lines for easier reading.

In 1985, Sullivan Entertainment and director Kevin Sullivan, turned the Anne of Green Gables books into a series of movies and a television mini-series that captured the hearts of people around the world. Starring, Megan Follows, Jonathan Crombie, Colleen Dewhurst, Richard Farnsworth, Schuyler Grant, Patricia Hamilton, Marilyn Lightstone, these movies have won many awards.

“Delightful, unpredictable Anne Shirley has been charming readers of all ages throughout the world for over half a century. The most popular and internationally acclaimed Canadian novel ever written is brought to the screen in a sparkling feature length version of the multi-award-winning miniseries that captures the story’s fairytale charm. The story of the irrepressible, redheaded orphan who comes to live with brother and sister Matthew and Marilla Cuthbert at Green Gables, stars Megan Follows in the title role of Anne. Veteran actress Colleen Dewhurst stars opposite her as Marilla Cuthbert and Richard Farnsworth plays Matthew Cuthbert.”

If you have only seen the Anne series of movies or TV mini-series, it is still worth reading the books. The movies condense the books and in some places even change the original story to suit a television audience. The books themselves take a different story line after Anne has grown up a bit and have many charming features that are not shown in the movies, like the adoption of the twins Dora and Davey that come to live with Anne and Marilla.