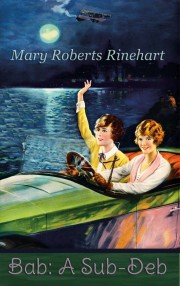 Bab, only twenty months younger than her sister, the official debutante, rebels against her treatment by her family. Set during the pre-World War I era, when women’s roles were rapidly changing, Bab determines to assert her independence through this series of misadventures and mysteries.

“I am writing all of this as truthfully as I can. I am not defending myself. What I did I was driven to, as any one can see. It takes a real shock to make the average Familey wake up to the fact that the youngest daughter is not the Familey baby at seventeen. All I was doing was furnishing the shock. If things turned out badly, as they did, it was because I rather overdid the thing. That is all. My motives were perfectly ireproachible.” – Bab

And this Bab feels through all of her hilarious and at times dangerous adventures to prove she is not just a Sub-Deb. These adventures are captured by Bab herself, and as she declares, with her most excellent spelling!

Written by that master of mystery and humor, Mary Roberts Rinehart, this book is a delightful combination of both. Bab: A Sub-Deb, by Mary Roberts Rinehart is a hilarious must read for any girl no matter how old. Parents, if you think your kids today are getting into scrapes, read about Bab in pre-World War I days and the grief she put her parents through in her desire to be independent and actually a “Deb” or debutante and not a sub-deb.

Jan Cohn, who wrote the excellent biography Improbable Fiction: The Life of Mary Roberts Rinehart, was given a dedication in our publication of Bab: A Sub-Deb.

Professor Cohn taught at Carnegie-Mellon University in Pittsburgh, PA and at Trinity College in Hartford, CT. Professor Cohn particularly liked the character of Bab, teaching about it in her classes. We had contacted her to write something for the book, only to find that she had just died of cancer. Her family approved our dedication of the book to Professor Jan Cohn.