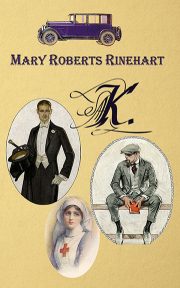 K. by Mary Roberts Rinehart is a mystery, a romance, and a saga of the lives of people during pre-World War I around a hospital, its employees, and the surrounding neighborhood.

The main character, called “K” Le Moyne, has disappeared from his own past and entered into the lives of those living on the street where he becomes the handsome, quiet boarder.

Beautiful, young, Sidney, struggling to help her widowed mother meet expenses, decides to rent a room. On their quiet street, this is somewhat scandalous as is Sydney’s desire to train to become a nurse in this pre-World War I era. When Sidney takes K Le Moyne in as a boarder, her future becomes irretrievably entwined with the mystery that enshrouds his past. Lies and intrigue begin to surround Sidney as she innocently proceeds in her career at the hospital.

Sydney is witness to violence and mishap in the hospital, just as Mary Roberts Rinehart was herself when training to become a nurse in Pittsburgh in the early 1900s. K falls in love with Sydney while the story unwinds to determine whether Sydney really loves K or the handsome doctor that she works with, who is responsible for murder at the hospital, and what is the mystery surrounding K.

The novel, K., gives the reader a great feel for life in pre-WWI days – what people were concerned about, what their difficulties were, as the everyday lives of the neighbors on the street are brought into play in the story. It is also a novel about the hardships of hospital work in the early 1900s. It delves into the real-life experiences of doctors and nurses striving to save lives from industrial accidents and the poverty of the inner city. But, as with all Rinehart novels, the book is laced with her intrepid whit, relieving the tension in some of the most difficult situations in the book.

With K., Mary Roberts Rinehart weaves a mystery around the characters on a Street; which could be any street – especially in Pittsburgh. Not only a mystery, K. is a romantic novel packed with characters drawn from the saga of life on the edge of industrial, Victorian, Pittsburgh from an author not afraid to write from her own experience. Rinehart writes with veracity of the hospital life that she herself knew, through Sidney’s experience while training as a nurse.

K. was on the the Publishers Weekly list of best selling novels in the United States in 1915.