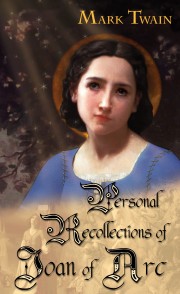 Personal Recollections of Joan of Arc

Personal Recollections of Joan of Arc, by Mark Twain, is a caring and personal portrayal of one of the most intriguing figures in all history.

“I like Joan of Arc best of all my books; and it is the best; I know it perfectly well. And besides, it furnished me seven times the pleasure afforded me by any of the others; twelve years of preparation, and two years of writing.” ~ Mark Twain

When the book was originally published as a serial in Harper’s Magazine with the April 1895 issue, it was unsigned and the public generally assumed that it was a translation done by Jean François Alden of the memoirs of Sieur Louis de Conte, a friend and constant companion of St. Joan of Arc during her lifetime. It was some time before the reading public found out that the author was Mark Twain, much to their surprise as mine. The ruse was given legitimacy by the following forward in the book:

A PECULIARITY OF JOAN OF ARC’S HISTORY

The details of the life of Joan of Arc form a biography which is unique among the world’s biographies in one respect: It is the only story of a human life which comes to us under oath, the only one which comes to us from the witness-stand. The official records of the Great Trial of 1431, and of the Process of Rehabilitation of a quarter of a century later, are still preserved in the National Archives of France, and they furnish with remarkable fullness the facts of her life. The history of no other life of that remote time is known with either the certainty or the comprehensiveness that attaches to hers.

The Sieur Louis de Conte is faithful to her official history in his Personal Recollections, and thus far his trustworthiness is unimpeachable; but his mass of added particulars must depend for credit upon his own word alone.

The Translator follows Joan through childhood, her prayer life with her Saints, battles as she leads the armies of France and finally through her trial and condemnation by the English priests. Through The Translator’s voice one gets to know Joan of Arc as the young girl that she was, the real person behind the legend.

If you have read this far on the page, you may have read other pages on this website to know that ARose Books’ focus in publishing is on books in American History. Why are we publishing a book on St. Joan of Arc? There are a few reasons:

1) On the front page of the ARose Books site we state: “Whether historical fiction or biography, these books give a sense of the era through the conflicts overcome, the feelings, and the goals of the people in the stories. Our books are chosen because they also allow for man’s spirituality in turning to God for help in times of trouble.” This book about the life of Jeanne D’ Arc falls into this category.

2) Samuel Clemens, known by the pen name of Mark Twain, is one of the most important American authors.

3) St. Joan of Arc led France in a war against England in which they prevented England from overtaking France. By her efforts in leading and inspiring her people, France remained a separate nation at that time and till this day. Without France as a separate nation during the American Revolution, we may not have won, or may have had a much more difficult time. It was France who aided us with ships, soldiers, and money, to help us become the United States of America. Indirectly, we may just have St. Joan of Arc to thank for that.

Perhaps the greatest example of courage in all the stories we may publish, ARose Books is proud to re­produce this work from Mark Twain showing St. Joan D’Arc, a simple village girl who accomplished and overcame impossible impediments through her faith in God and her absolute surrender to God’s Will. It shows what God can do with a person who has such faith and such surrender – mountains may be moved, battles won, countries freed!