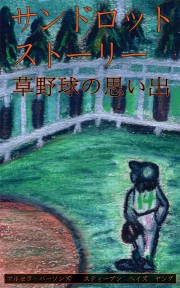 Sandlot Stories (Japanese Language Edition) was translated into Japanese by Mariko Inoue. The book is published in traditional Japanese fashion reading vertically down the page from right to left.

Mariko spent a year working to translate each story so that each author’s original use of everyday English was translated as closely as possible into everyday Japanese. It was her intent to translate the book so that the stories had the feelings and language that the author intended.

Sandlot Stories (Japanese Language Edition) is not just a translation, it is a work of art.

The book includes two stories by Japanese authors about playing their sandlot game (Kusa-Yakyuu) in Japan. Another tells of a man who taught children in Japan to play baseball after World War II.

I am sad to report that Steven Hayes Young passed away in November, 2013 from a very aggressive cancer. Not only did Steve help put this book together, but he also started SandlotHero.com to give the “Justin Perkins Award” to kids for non-academic achievements such as bravery, helping others, community service, etc. The Sandlot Hero website has grown to be a meeting ground where children help others through many kinds of trials and difficulties like cancer. Steve was very dedicated to this idea of recognizing children for their work to help others with no thought of reward for themselves. I hope this dream will live on.