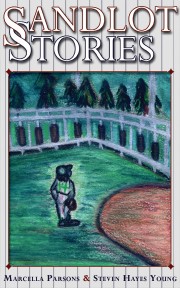 See the international passion for baseball through the eyes of children who played. With these uniquely personal accounts, given by dozens of people from across the world, Sandlot Stories invites its readers into the lives of everyday people as they look back and remember the great American game.

The writers of these sandlot stories come from all walks of life – some are millionaires, some are mothers and grandmothers, one was sleeping in a car when we first met him while putting himself through college to become a writer, some are immigrants from other lands, and many are those of us who grew up in small town America.

Each story is woven around its own place and time, whether a town, a backyard, or a street, from 1910 through the 1980’s. The stories are spread across the entire U.S. from East to West, including Alaska and Hawaii, and a few are even from Japan. Some focus on the game, the rules, or even the ball, while others are about people and their relationships. This is a book about hometowns, small and large, experienced through the game of sandlot baseball.

The book is broken into three sections: Opening Pitch – stories about childhood sandlot games and the rules used; Seventh Inning Stretch – stories about childhood baseball and how baseball is part of adult life for the writer; and finally the most surprising stories in the third section, The Game That Never Ends – stories in which the writer had a profound life or spiritual experience around playing baseball.

ARose Books is proud to have Sandlot Stories listed in the ABNER library catalogue of the National Baseball Hall of Fame. Sandlot Stories was accepted into the research library because it documents the rules children across the U.S. used in sandlot ball going back almost 100 years in history.

“This is my story, and yours, and that of every other kid that ever played the game. Reading these stories will bring back the smell of fresh cut grass, memories of friends long past, and take you back to a time when your life was all about just scoring the winning run.” – Robert J. Day

I am sad to report that Steven Hayes Young passed away in November, 2013 from a very aggressive cancer. Not only did Steve help put this book together, but he also started the “Justin Perkins Award” to give to kids for non-academic achievements such as bravery, helping others, community service, etc. Steve was very dedicated to this idea of recognizing children for their work to help others with no thought of reward for themselves. I hope this dream will live on.