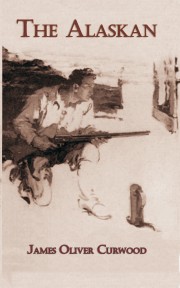 The Alaskan by James Oliver Curwood, is the story of Mary Standish and her escape from her past into the uncivilized wilderness of Alaska in the early 1900s. It is the story of Alan Holt and his fight to protect the Alaskan resources of his own vast ranch land and the people he loves.

As the two stories intertwine, tragedy strikes Mary aboard the steamer bound for Alaska prompting Alan to fight against the politics and corruption behind the tragedy that also threaten the native people and land of Alaska. The stories of Mary and Alan lead to gripping action on the Alaskan frontier where men fight battles as in the days of the American Wild West with the law hundreds of miles away across the wilderness.

This novel tells about the real problems that Alaskans faced in 1910 before the discovery of oil – when gold, crops, herds, and land were the commodities people fought over. James Oliver Curwood spent many years in this wilderness and wrote authentically from first hand experience of the struggles between conservation in land development, and the greed and corruption of those that would plunder the land. He was an ecologist before it was popular and was appointed Chairman of the Game, Fish, and Wildlife Committee of the Michigan Department of Conservation in 1927.

The Alaskan was made into a movie in 1924 by director Herbert Brenon, staring Thomas Meighan as Alan Holt, Estelle Taylor as Mary Standish, and Frank Campeau as Stampede Smith.