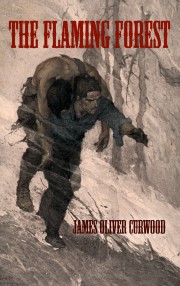 The Flaming Forest by James Oliver Curwood, is a rip-roaring tale of travel through the upper Canadian wilderness during the early 1900s, with a forest fire and of course a love story, all combined to bring a book that you can not put down.

David Carrigan, out in the wilderness to catch Black Roger Audemard, a notorious murderer, is ambushed and taken hostage by the beautiful Jeanne Marie-Anne Boulain without explanation. His lovely captor will only tell him that all will be explained once they meet up with their leader, St. Pierre Boulain.

Thus agreeing, David embarks on a journey of hundreds of miles with the Boulain Brigade as they traverse the Canadian rivers and trails towards the intended meeting. While seemingly free, he is quite aware that the Boulain men are guarding him. Throughout all this, he manages to enjoy the trip and fall in love with Jeanne Marie-Anne while reminding himself of his duty as a Mounty.

A Royal Northwest Canadian Mounty always gets his man. Or does he? Will David Carrigan catch Black Roger Audemard and escape his captors? Will he win the love of the illusive and possibly dangerous Jeanne Marie-Anne Boulain or be forced to arrest her and turn her in for her crime? Read to find out!

The Flaming Forest originally printed in 1921 is full of Curwood’s love of life and the great outdoors; with adventure, mystery, and romance – there is something for everyone! As in most of Curwood’s novels,  The Flaming Forestbrings in unique characters of the Canadian wilderness: the Boulain men – French Canadian backwoodsmen that sing while rowing or chopping wood, the Native American genius that can heal the wounds of the Boulain men with ancient medicine known only to him, the gnarled and bent figure of Marie-Anne’s protector who wants only to fight David in “one gran’ fight”. This edition contains the original illustrations by Charles Livingston Bull from the 1921 publication including that on the cover.

Made into a movie in 1926 by director Reginald Barker, The Flaming Forest stars Antonio Moreno as Sergeant David Carrigan, Renée Adorée as Jeanne-Marie, and Gardner James as Roger Audemard.