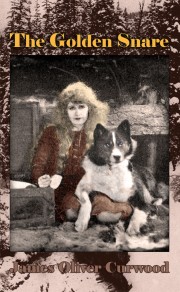 The Golden Snare, by James Oliver Curwood is a tale of high adventure in the Canadian wilderness in the early 1900s. When Sergeant Phillip Raine of the Northwest Mounted Police finds the golden snare he embarks on a dangerous journey to discover its origins with surprising results. From dog sled, to snow shoes, across barrens and through blizzards, he risks his life to track down Bram Johnson and learn the fate of the owner of the golden snare across the vast Northern wilderness of upper Canada to near the Arctic.

“Bram Johnson was an unusual man even for the northland. He was above all other things a creature of environment and necessity and of that something else which made of him at times a man with a soul and at others a brute with the heart of a devil.”

When this book was written, the reading public was very interested in Canadian and Alaskan wilderness stories as the great gold rush has been on there for sometime and Jack London’s stories were being read about that drama. Curwood writes of very interesting characters in this same Northern wilderness, but his stories tell more about natives of the land than the interlopers looking for gold. In The Golden Snare he gives us Bram, almost an animal, but with a heart underneath that gives all to protect those he loves though misunderstood and hunted ruthlessly by the Royal Northwest Canadian Mounties. We also meet fighting native tribes and are shown their unusual tactics in warfare with “white” men.

“A thrill of horror shot through him. It was the one unconquerable fighting trick of the Eskimos – that neck hold. Caught from behind there was no escape from it. It was the age-old sasaki-wechikun, or sacrifice-hold, an inheritance that came down from father to son – the Arctic jiu-jitsu … Philip lay still for a single instant.”

And, as if that weren’t enough, the story brings in another major feature in the Northern wilderness – that of the peoples from the Russian continent that land by ship and have a part in the drama of the Northern Alaska and Canadian wilderness life of the early 1900s. This fast moving action, adventure novel brings together all these unique features of frozen Northland while still endearing us to some of the characters portrayed within the story or horrifying us with the brutality of others. The only regret you, the reader may have, is that you can not put the book down so that it is all too soon finished requiring you to find another Curwood novel quickly to stay in the adventure of living in the Northland wilderness.

This book includes the original photos from the classic movie of the same name, made in in 1921 staring Lewis Stone as Philip Raine, Wallace Beary as Bram and Ruth Renick as Celie. Our version of this book, republished from an original, contains restored images from the movie showing Ruth Renick as Celie on the front cover.