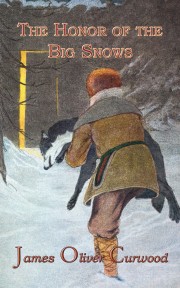 The Honor of the Big Snows

Out of the night came Jan and into the lives of all those at the company post on Lac Bain, in the Canadian Northland. Jan, almost starved and frozen, enters into the lives of John Cummins and Melisse, his daughter, playing his violin for food. He stays to become a beloved member of their family and the community.

But Jan has a deep mystery about his past that haunts him. When a stranger shows up at the camp, this hidden past is threatened exposure. Jan’s mystery unravels as he faces life at the remote outpost during the early 1900s, a smallpox outbreak at the camp, and his love for little Melisse. It is the Honor of the Big Snows, part of his heritage, that Jan must keep, and that leads him to leave the post searching for his honor in his past.

In The Honor of the Big Snows, James Oliver Curwood which is not as widely read as some of his other novels, delves into a part of the culture of the people that he lived with and wrote about in this Canadian wilderness of the early 1900s. The ethics of the half Native American – Cree, and half French Canadian, born out of Catholicism, the love of nature, and Cree mysticism – these ethics are the “honor” of the big snows or the snow country of upper Canada

This novel deals with the ostracism and sometimes revenge that happens when the honor system is broken. It is a passionate novel with raw feelings and relationships born out of very painful circumstances. It is not the light and easy going novel as some of Curwood’s other stories, but well worth reading if you are interested in this particularly unique culture born out of the mixing of races and religions, far from civilization in an era when culture and opinion were formed and passed along without today’s mass communication but by the spoken word passed from snow-shoe born messenger to the dwellers of teepee or log cabin.

The The Honor of the Big Snows by James Oliver Curwood deals with a complex and unorthodox story around Jan. Even today, many people will identify with Jan and his search for his honor.