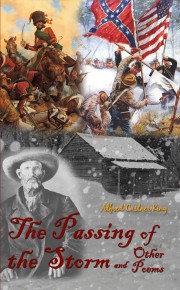 The Passing of the Storm

The Passing of the Storm, by Alfred Castner King, is an epic poem that takes the reader on a journey through the history of the American Civil War, The Crimean War in Russia, and life in the Rocky Mountains during the early 1900s.  Through stories told by Colorado gold miners trapped in a cabin in a mountain blizzard they relate their life histories around these major historical events; telling tales of brothers separated into the Union and Rebel armies, a student imprisoned in a Siberian jail, courage, fears, and lost love.

A rare example of epic verse, it sends its readers deep into the heart of the ruggedly wild world of the late 19th and early 20th centuries, blending together the pivotal events of that tumultuous era with an ageless tale of brotherly courage and love.  The stories capture the heart of what drove men from all over the world to seek solace in the American West during those times.

Originally published in 1907, Alfred Castner King’s unique and beautiful The Passing of the Storm survives as his most enduring work. The book includes Other Poems describing life in the American West during the early 1900s and particularly the beauty of the Rocky Mountains and Colorado.

Even before his accidental blinding midway through life, it was King’s passion to forever memorialize the natural splendor and simple majesty of the American frontier and its humble working class. But it was his continual struggle to come to terms with his late tragedy that gives much of his collected Other Poems their unique and intensely captivating voice.

“Alfred Castner King had been a lover of nature, a man of the mountains and forests who had embraced the beauty of the natural world with his heart and soul. His poems were written after an accident left him blind. I have read his poems over the years and, at times, have been overwhelmed by the beauty of his words. King’s poetry possesses a spirit that reaches through time and beyond the darkness that shrouded the man.” ~ Francis Wood, author of “The Angel Carver”

Note on Alfred Castner King found written in the cover of the original book: “Purchased this book from the author, Mr. A. C. King who is now blind having lost his eyesight in a mining explosion at Ouray, Colo. and composed this book along with one other since the accident.”

By publishing he Passing of the Storm, we found another fan of Alfred Castner King in Francis Wood. Francis is the author of books whose stories cover a broad spectrum of American life from the feelings of post war veterans to Native American folklore and can be found at The Tip of the Moon website. Francis based a character in his book, The Angel Carver, on Alfred Castner King.