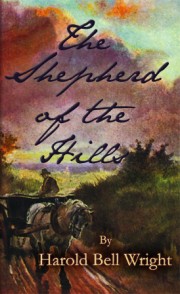 The Shepherd of the Hills

The Shepherd of the Hills, by Harold Bell Wright is a tale of romance and mystery set in the wild, rugged backwoods of the Ozark mountains during the early 1900s. Disillusioned and depressed, Dan Howitt leaves his city life seeking refuge from a secret anguish in these backwoods of the Ozarks.

Here in the hills he becomes a friend to Old Matt whose life has been shattered by sorrow; an adviser to Sammy and Young Matt; a guardian to the poor lost boy, Pete; a victim of mountain vigilantes; and finally a player in the mystery of the ghostly figure that roams the hills at night.

The original reviews from 1907:

“There is … an atmosphere as fresh and sweet and free from modern grime as one would breathe on the Ozark trails themselves.” ~ New York Times

“The people who move within it are so human that the reader of their story will pick them out for like and dislike, as if he had really known them in the flesh, rather than in the pages of a book.” ~ Chicago Journal

“One of the best novels to be written in the English language for over a decade. … Good luck to the man who can put upon paper so fine a novel of American life.” ~ Pittsburgh Press

The story has enough mystery and drama to keep readers wondering what will happen next while the characters work out, through revenge or acceptance, their loves, hates, and losses. Many will relate to these rough, mountain characters. Seemingly simple and dull, they face all the hardship, heartache, and challenges that people everywhere live with.

The Shepherd of the Hills was made into a movie in 1919 starring Harry G. Lonsdale as the Shepherd, Dan Howitt, Catherine Curtis as Sammy Lane, and George McDaniel as Young Matt. Harold Bell Wright actually wrote the screen play working with director Louis F. Gottschalk to produce the film.