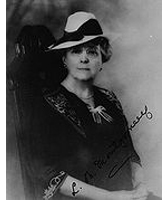 Born in Clifton, Prince Edward Island, on November 30, 1874, Lucy, or Maud, as she was known to family and friends, lived there with her grandparents after her mother died and her father moved to western Canada and remarried. She attended school in nearby Cavendish until the year (1893-1894), when she left to study for a teacher’s license at Prince of Wales College, completing the two-year course in one year and graduating with honors.

Miss Montgomery taught at several schools on the islands off Canada then went to study English literature at Dalhousie University in Halifax, Nova Scotia. While she was studying at Dalhousie, she received the first payments for her writing.

Maud Montgomery had been a voracious reader since early childhood and had started writing as a young woman, submitting poems, short stories, articles and serials to Canadian, British, and American magazines.

In 1908, Montgomery’s first novel, Anne of Green Gables, was accepted by the Page Company of Boston, Massachusetts and published that year. It became a best-seller and was the start of her extremely successful career as a novelist.

Maud had been caring for her grandmother for many years. After her death in 1911, she married the Reverend Ewan Macdonald to whom she had been secretly engaged since 1906. After their marriage, Maud and Ewan moved to Leaskdale, Ontario, where Macdonald was minister in the Presbyterian church. They had three sons: Chester (1912), Hugh (stillborn in 1914), and Stuart (1915).

Maud worked helping her husband in his pastoral duties; ran their home; and continued to write best-selling novels as well as short stories and poems. She also recorded entries in her journals and kept up an enormous correspondence with friends, family, and fans. It is from these journals that much of her history is known today.

I encourage all young girls to read the Anne of Green Gables, series of books and parents – encourage your children to do this. These books are full of timeless, heart warming, and delightful characters as well as the escapades of Anne herself, still interesting today. ARose Books now offers the first in the series of “Anne” books called Anne of Green Gables in paperback and in Kindle and other eBook formats.

Something Rhymed website has an interesting articled on Lucy Maud Montgomery with our cover image of Anne of Green Gables.

Below are a list of Lucy Maud Montgomery’s novels and movies made from them.