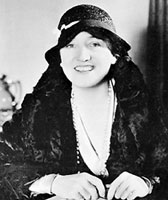 Mary Roberts Rinehart was the highest paid author in the United States during the first fifty years of the 20th Century. This status comes not only from income derived from book sales, but magazine articles, short stories, and plays. Her books were often best-sellers and she is called the “Agatha Christie” of the United States for her many, humorous mystery novels.

Rinehart is the author of the famous “Tish” stories that were published in the Saturday Evening Post beginning in 1911 and continuing as a serial for over 20 years. She had one long-running box office hit in the play, “The Bat” which ran from 1920 on for years, and was made into a silent film in 1926. Rinehart also wrote many short stories and an autobiography, but is most famous for her mystery novels.

Mary Roberts Rinehart was born Mary Ella Roberts on August 12, 1876 in the town of Allegheny, Pennsylvania. At that time Allegheny was quite a lovely neighborhood of Victorian homes on the north end of Pittsburgh. It has since become part of Pittsburgh proper and those homes have become small theaters and museums, some featuring Rinehart’s work.

As a child, Mary was raised with the most strict ethics and etiquette of the time, to be a lady. But this little lady, with much gumption and vigor had other ideas. Along with most families of that day, Mary’s parents, Tom and Cornelia Roberts, could not completely protect their children from the hardships of 19th century life. Mary had an accident while attending an exposition in Pittsburgh when a balcony collapsed. She was some months recovering from her injuries. Later, a friend of hers died from illness. At the age of fifteen, while her mother was ill and her father was on the road as a salesman, Mary decided to assist the family fortunes by trying to sell some of the stories she had written. A local newspaper had advertised for readers to send in short stories, so Mary wrote three and saw all three published making one dollar apiece. This was the beginning of the idea that she could be self-supporting.

All through high school, Mary operated on her own hopes that she would go to college. Inspired by a woman doctor in her neighborhood that was tending the sick and her own experiences with illness and the death of childhood friends, she decided that she too wanted to become a doctor. Her mother, Cornelia had other ideas for her daughter’s future though and they argued. Mary went to consult the family physician, only to find him out of town with a replacement in young, handsome, Dr. Rinehart. In telling him her dreams, he agreed to take her on a tour of the newly created school for nursing, one of the first in the country, at the Pittsburgh Homeopathic Hospital. Fully expecting this proper young woman to be appalled at the realities of nursing in a hospital on the edge of industrial Pittsburgh and run back to her parents, he thought he was doing her a favor. But Mary Ella Roberts not only withstood the disapproval of her family, she moved into the nursing student’s quarters at the hospital and proceeded through the training, working long, hard hours in the hospital amidst the gritty realities of tending to industrial accidents and contagious diseases that circulated at that time. Mary graduated as a nurse, but was also engaged to be married to the handsome Dr. Rinehart by then.

Married women were not permitted to work as nurses then, so Mary, now Mary Roberts Rinehart, went on to help her husband at times as a nurse or assistant, to be a mother, and to take up writing around these other responsibilities.

Her first writings were stories sent to Magazines. The earliest seems to be from Munsey’s Magazine, but it took her some time to develop her writing style, working in the vacuum of her home after all her other chores were completed. Her first big hit was The Man in Lower Ten which ran as a serial in All-Story magazine in 1906 and later was published as a book. Mary became popular overnight as a mystery writer with a wonderful wit. Railroad porters at the time were frustrated because people refused to stay in sleeper #10 on the cars after the release of this story that included a murder in the dubious sleeper car. Mary became a prolific writer from then on, producing many best selling novels.

As a reporter for the Saturday Evening Post and an ambassador for the U.S. Red Cross, Rinehart was sent to the front lines and trenches of World War I Belgium; the only reporter allowed up to the front for some time not to mention the first woman reporter at the front. When preparing for her trip, she included a full-length gown, kid gloves, and fur coat, along with boots and khakis as trench attire. The fur coat came in handy for warmth in the many cold trains, and sparse sleeping accommodations on her trip through war torn Europe, while the gown, gloves, and fur came in handy when she was presented to the King and Queen of Belgium. The khakis and boots were worn to the trenches.

Her time visiting her aunt’s farm in the summers of her childhood and horse-back riding at her uncle’s home in Sewickley, PA gave her a love of the outdoors that continued into adulthood with her own family. Dr. Rinehart, Mary, and their sons spent many vacations in the west riding, camping, and roughing it.

Later Dr. Rinehart, Mary, and the boys moved to a large, lovely home in Sewickley, PA that Mary jokingly called “The Bluff” for its position on a hill overlooking the river and their ability to maintain its costs from her writing and Dr. Rinehart’s income. Many of her novels are set in Pittsburgh mixing characters from the affluence of Sewickley and the working class of the many steel mills along the rivers.

A Major in the United States Army Medical Corps, Dr. Stanley M. Rinehart died in 1932, while Mary died in 1958. For their efforts during World War I, both Dr. Rinehart and Mary are buried in the Arlington National Cemetery were you can read about them in the archives. The Sewickley Valley Historical Society has also maintained an extensive collection of information on Mary Roberts Rinehart.

Below are a list of Mary Robert Rinehart’s novels, plays, serials, and movies made from them.